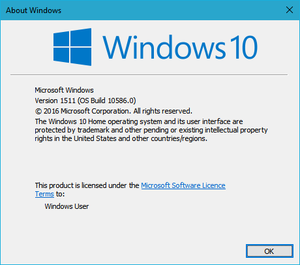 The About Windows screen.

I upgraded to Windows 10 (from Windows 10) back in August. The upgrade experience was okay. The main issue I had was that the error messages were a bit uninformative. There was one error, Windows 10 claimed it couldn’t check available disk space, which is a really strange way to say your active partition is a Linux one and you have a Linux bootloader set up. But after switching to the Windows bootloader, it worked fine. I only had to fight a bit with the display drivers, but other than that, it succeeded.

Windows 10 claims to be Windows as a Service: a fast update cycle with new Windows builds released often. Now, Linux users are accustomed to this. Depending on your distribution, you get new versions somewhere between “every day” (rolling release: Arch Linux, Gentoo, Debian sid), “every 6 months” (Ubuntu, Fedora), or some other time scale. (Three months and two weeks passed between the two “general” builds of Windows 10.) And most of the time, the upgrades are fast and relatively painless.

With Windows 10, this is not the case. I booted to Windows yesterday, to set up some new hardware and mess around with the OS. It offered the upgrade in Windows Update. After downloading it (3 GB, according to Microsoft), it started installing, without success. There were no error messages, and “Error” or “Failed to install” were all I could get.

I found the setup log files. The error log ended with “failed to resurrect new system”. Which didn’t make a lot of sense to me, even though I’m quite proficient with this sort of things.

This can be dangerous, so I backed up my drives with Clonezilla, which is really useful — and it ships with the Arch Linux ISO, which helped a lot.

So, I tried my trusty friend, the Media Creation Tool. I needed it to get the original install to work, and it came useful now. After yet another download, I got a USB stick with Windows 10 on it. So, I rebooted to the installer, which told me I can’t use it and I need to start it from within Windows.

I rebooted back into Windows, started the installer. It took it a while to begin the installation process (including waiting forever to get updates, so I restarted the process and disabled updating now, and another long wait to make sure it will work on my machine), but then it went quite fast and was at 70% after less than 10 minutes. Sadly, that’s too good to be true. It rebooted and started counting from zero. 90 minutes passed since I started, and the login screen came up. Username, password, log in.

Hi, we’ve updated your PC. Six more minutes, but at long last, I got my desktop. There’s just one problem though: 1024×768 is not the screen resolution I started the install with (oddly enough, the “Updating Windows” part was running at 1080p for part of the process, and then went back to 768p after a reboot). I tried installing NVIDIA drivers, and it failed — however, Windows managed to install something and wanted a reboot (what is this, Windows 95?). Fine, let’s reboot and get a fully functional Windows environment?

:( Your PC ran into a problem and needs to restart. A blue screen of death, on the second boot, talking about critical structure corruption in CI.dll. Well, shit. I rebooted, but I first took a little detour to the Arch Linux USB stick I prepared before to get a sane bootloader back. I’ve done this before, and usually requires three commands.

Wait, what?! I remember my hard drive layout, and /dev/sda2 is my Linux ext4 partition! I checked cfdisk, and apparently I now have a Hidden NTFS WinRE, with Linux moved to /dev/sda3 and my extended partition moved to /dev/sda4 (what would happen if I already had four partitions?). This is typical Windows misbehaviour: not caring about other OSes that might be installed.

I accepted this defeat, mounted /dev/sda3, ran arch-chroot /mnt and syslinux-install_update -i -a -m (I’m not a fan of GRUB 2, and I have a MBR drive layout). I should test this out by rebooting into Linux.

systemd really values /etc/fstab, and you can’t boot if any entry fails to mount, which was the case with the Windows drive in /dev/sda1 and my other NTFS partition (note that the error message is very unhelpful)

I guess I have to get into Windows first. I tried booting Windows again, this time it worked (in glorious 1080p, which was the case on the previous boot too).

So, Windows re-enabled Fast Boot (a.k.a. hibernation instead of clean shutdown) as part of the upgrade. I hunted down the setting and restored sanity. But when I was doing that, I noticed things were spelt (or spelled) a bit differently than two hours ago. You see, the original Windows 7 system was US English. After the upgrade to Windows 10, I took the opportunity to install the British and Polish language packs (it’s a multi-user machine). Both of which were gone. I had to fix that, too.

And all I got out of it were colourful window borders, which are not even in my desired colour (Windows has a limited colour palette, even though I explicitly set it to #00AADD). What a great way to waste a Saturday!

This leaves me wondering, how does this work for Windows Insiders (Microsoft’s community beta testers)? Is the process better if Windows Update manages to perform the install? Or is it substantially faster if you’re running on a SSD? Perhaps the testers have dedicated machines and don’t run experimental builds on their daily drivers. But I doubt that, because that’s a significant investment without any financial gain from helping out a corporation. So, virtual machines? I have no idea how they cope.

By the way, cmd.exe and winver.exe claims it’s Copyright © 2016. Previously, Windows copyright notices were outdated. Now, they’re in the future.