You’ve just written a great Python web application. Now, you want to share it with the world. In order to do that, you need a server, and some software to do that for you.

The following is a comprehensive guide on how to accomplish that, on multiple Linux-based operating systems, using nginx and uWSGI Emperor. It doesn’t force you to use any specific web framework — Flask, Django, Pyramid, Bottle will all work. Written for Ubuntu, Debian, Fedora, CentOS 7, Alma Linux, Rocky Linux and Arch Linux (should be helpful for other systems, too). Now with an Ansible Playbook.

In order to deploy your web application, you need a server that gives you root and ssh access — in other words, a VPS (or a dedicated server, or a datacenter lease…). If you’re looking for a great VPS service for a low price, I recommend Hetzner Cloud (reflink [1]), which offers a pretty good entry-level VPS for €3.49 + VAT / month (with higher plans available for equally good prices). If you want to play along at home, without buying a VPS, you can create a virtual machine on your own, or use Vagrant with a Vagrant box for Fedora 35 (fedora/35-cloud-base).

Your server should also run a modern Linux-based operating system. This guide was written and tested on:

Debian 8 (jessie) 9 (stretch), Ubuntu 16.04 LTS, and Fedora 24 through 32 are not officially supported, even though they still probably work.

What if you’re using Docker? The story is a bit complicated, and this guide does not apply, but do check the Can I use Docker? at the end of this post for some hints on how to approach it.

Users of other Linux distributions (and perhaps other Unix flavors) can also follow this tutorial. This guide assumes systemd as your init system; if you are not using systemd, you will have to get your own daemon files somewhere else. In places where the instructions are split three-way, try coming up with your own, reading documentation and config files; the Arch Linux instructions are probably the closest to upstream (but not always). Unfortunately, all Linux distributions have their own ideas when it comes to running and managing nginx and uWSGI.

nginx and uWSGI are considered best practices by most people. nginx is a fast, modern web server, with uWSGI support built in (without resorting to reverse proxying). uWSGI is similarly aimed at speed. The Emperor mode of uWSGI is recommended for init system integration by the uWSGI team, and it’s especially useful for multi-app deployments. (This guide is opinionated.)

A Playbook that automates everything in this tutorial is available.

Even though I personally recommend the Playbook as a much less error-prone way to set up your app, it might not be compatible with everyone’s system, or otherwise be the wrong solution. The original manual configuration guide is still maintained.

Even if you are using the Playbook, you should still read this to find out what happens under the hood, and to find out about other caveats/required configuration changes.

All the commands in this tutorial are meant to be run as root — run su or sudo su first to get an administrative shell. This tutorial assumes familiarity with basic Linux administration and command-line usage.

Start by installing Python 3 (with venv), nginx and uWSGI. I recommend using your operating system’s packages. Make sure you are downloading the latest versions available for your OS (update the package cache first). For uWSGI, we need the logfile and python3 plugins. (Arch Linux names the python3 plugin python; the logfile plugin may be built-in — check with your system repositories!). I’ll also install Git to clone the tutorial app, but it’s optional if your workflow does not involve Git.

This tutorial will work for any web framework. I will use a really basic Flask app that has just one route (/), a static hello.png file and a favicon.ico for demonstration purposes. The app is pretty basic, but all the usual advanced features (templates, user logins, database access, etc.) would work without any other web server-related config. Note that the app does not use app.run(). While you could add it, it would be used for local development and debugging only, and would have to be prepended by if __name__ == '__main__': (if it wasn’t, that server would run instead of uWSGI, which is bad)

The app will be installed somewhere under the /srv directory, which is a great place to store things like this. I’ll choose /srv/myapp for this tutorial, but for real deployments, you should use something more distinguishable — the domain name is a great idea.

If you don’t use Flask, this tutorial also has instructions for other web frameworks (Django, Pyramid, Bottle) in the configuration files; it should be adjustable to any other WSGI-compliant framework/script nevertheless.

This guide used to recommend creating the venv in /srv/myapp. This was changed to improve in-place Python upgrades. Virtual environments should be ephemeral, so that rm -rf $VIRTUAL_ENV is recoverable in less than 10 minutes and 2 commands. The old structure made the venv hard to delete without deleting appdata. The current structure has /srv/myapp/venv and /srv/myapp/appdata separate. An alternative structure would put the app in /srv/myapp, but that requires including venv, sockets and other deployment-specific files in .gitignore (or having dirty working directories).

We’ll start by creating a virtual environment, which is very easy with Python 3:

(The --prompt option is not supported on some old versions of Python, but you can just skip it if that’s the case, it’s just to make the prompt after source bin/activate more informative.)

Now, we need to put our app there and install requirements. An example for the tutorial demo app:

What this directory should be depends on your web framework. For example, for a Django app, you should have an appdata/manage.py file (in other words, appdata is where your app structure starts). I also assumed that the appdata folder should have a static subdirectory with all static files, including favicon.ico if you have one (we will add support for both in nginx).

At this point, you should chown this directory to the user and group your server is going to run as. This is especially important if uwsgi and nginx run as different users (as they do on Fedora). Run one of the following commands:

Parts of the configuration depend on your operating system. I tried to provide advice for Ubuntu, Debian, Fedora, CentOS, EL8, and Arch Linux. If you experience any issues, in particular with plugins, please consult the documentation.

We need to write a configuration file for uWSGI and nginx.

Start with this, but read the notes below and change the values accordingly:

Save this file as:

You can test your configuration by running uwsgi --ini /path/to/myapp.ini (disable the logger for stderr output or run tail -f /srv/myapp/uwsgi.log in another window).

If you’re using Fedora, CentOS, or EL8, there are two configuration changes you need to make globally: in /etc/uwsgi.ini, disable the emperor-tyrant option (which we don’t need, as it sets uid/gid for every process based on the owner of the related .ini config file — we use one global setup) and set gid = nginx. We’ll need this so that nginx can talk to your socket.

We need to configure our web server. Here’s a basic configuration that will get us started:

Save this file as:

Note that this file is a very basic and rudimentary configuration. This configuration is fine for local testing, but for a real deployment, you will need to adjust it:

After you’ve configured uWSGI and nginx, you need to enable and start the system services.

All you need is:

Verify the service is running with systemctl status emperor.uwsgi

Make sure you followed the extra note about editing /etc/uwsgi.ini earlier and run:

Verify the service is running with systemctl status uwsgi

If you disabled SELinux, this is enough to get an app working and you can skip over to the next section.

If you want to use SELinux, you need to do the following to allow nginx to read static files:

We now need to install a SELinux policy (that I created for this project; updated 2020-05-02) to allow nginx and uWSGI to communicate. Download nginx-uwsgi.pp and run:

Hopefully, this is enough (you can delete the file). In case it isn’t, please read SELinux documentation, check audit logs, and look into audit2allow.

For Ubuntu and Debian

Start by disabling the LSB service that comes with Ubuntu and Debian:

Copy the .service file from the uWSGI systemd documentation to /etc/systemd/system/emperor.uwsgi.service. Change the ExecStart line to:

You can now reload systemd daemons and enable the services:

Verify the service is running with systemctl status emperor.uwsgi. (Ignore the warning about no request plugin)

Your web service should now be running at http://localhost/ (or wherever you set up server to listen).

If you used the demo application, you should see something like this (complete with the favicon and image greeting): 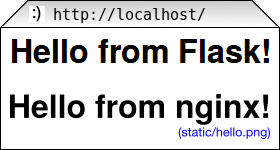 If you want to test with cURL:

Hopefully, everything works. If it doesn’t:

Can I use Docker?

This blog post is written for systems running standalone. But Docker is a bit special, in that it offers a limited subset of OS features this workflow expects. The main issue is with user accounts, which generally work weird in Docker, and I had issues with setuid/setgid as used by uWSGI. Another issue is the lack of systemd, which means that another part of the tutorial fails to apply.

This tutorial uses uWSGI Emperor, which can run multiple sites at once, and offers other management features (such as seamless code restarts with touch /etc/uwsgi/vassals/myapp.ini) that may not be useful or easy to use in a Docker environment. You’d probably also run uWSGI and nginx in separate containers in a typical Docker deployment.

Regardless, many parts of this tutorial can be used with Docker, although with the aforementioned adjustments. I have done some work on this topic. This tutorial has an Ansible Playbook attached, and the tutorial/playbook are compatible with five Linux distros in multiple versions. How do I know that there were no unexpected bugs in an older version? I could grab a Vagrant image or set up a VM. I do that when I need specific testing, but doing it for each of the distros on each update would take at least half an hour, probably even more. Yeah, that needs automating. I decided to use GitHub Actions for the CI, which can run anything, as long as you provide a Dockerfile.

The Docker images were designed to support running the Playbook and testing it. But the changes, setups and patches could be a good starting point if you wanted to make your own Docker containers that could run in production. You can take a look at the Docker files for CI The images support all 5 distros using their base images, but you could probably use Alpine images, or the python docker images; be careful not to mix Python versions in the latter case.

That said, I still prefer to run without Docker, directly on the system. Less resources wasted and less indirection. Which is why this guide does it the traditional way.

Hopefully, the guide worked for you and your Python web app is up and running. If so, great! Otherwise, make sure you did everything as stated in this guide. If you are still stuck, ask for help in the comments.
Check out my other guides!